The Nakamura Keith Haring Collection was first established in 2007 as the only museum in the world to exhibit exclusively the artworks of Keith Haring—a forerunner of American contemporary art who lived the upheaval of 1980’s New York City. With your support and generosity, this year we celebrate our ten-year anniversary.

Through the rhythmic and jubilant lines that shape Haring’s drawings, the Nakamura Keith Haring Collection presents exhibitions to address the tragedies and tribulations often found in society, which include war, violence, and social injustices. We believe that Haring’s art embodies the importance and preciousness of life, containing strong themes of peace, freedom, hopes, and dreams of humanity. These works continue to resonate, transcending time, while exposing the issues in society to this day.

After reaching our 10 year milestone, the Nakamura Keith Haring Collection continues to operate as more than just a museum, but as an institution that celebrates communication, interaction, and education through art and cultural experience.

We would like to thank those who have understood and supported us throughout this exciting and rewarding decade. I thank you from the bottom of my heart. 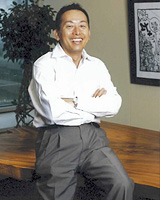 The Nakamura Keith Haring Collection was designed based upon the concepts of both light and darkness and chaos and hope, reflecting the turbulent state of the time Haring lived.
We hope that visitors experience Keith Haring’s vision, life, and the time he lived—let that energy sink in while looking at his artworks.

In the spring of 2015, the Nakamura Keith Haring Collection expanded and reopened to redefine the unlimited scope of the museum. The expansion includes two new gallery spaces, which will function as a venue for new generations of artists that carry the legacy of Haring’s art. The lightning-inspired exterior façade, which surrounds the outside theater, evokes the strength and power found within the forces of nature, creating a dialogue with Haring’s works, which emphasize the importance and preciousness of life.

Atsushi Kitagawara was born in 1951 in Nagano Prefecture, Japan, at the foot of the Japanese Alps. He has been engaged in a wide range of architectural projects, along with urban planning, landscape design, and furniture.
He is most recognized for his original and creative architectural ideas and design methods, often inspired by various art forms, such as poetry, music and contemporary arts. Revered and acclaimed for his accomplishments, Kitagawara has received many prizes and gold medals both in Japan and overseas, which including the Architectural Institute of Japan Award in 2002, the first prize in the Innovative Architecture International Award (Italy) in 2006, and the Grand-Prix in the Kenneth Brown Architecture Design Award in 2007. As a registered architect in Japan, he has also won many first prizes in competitions and has been commissioned large-scale projects, including the Fukushima Big Palette International Exhibition and Convention Centre, which was completed in 1998.